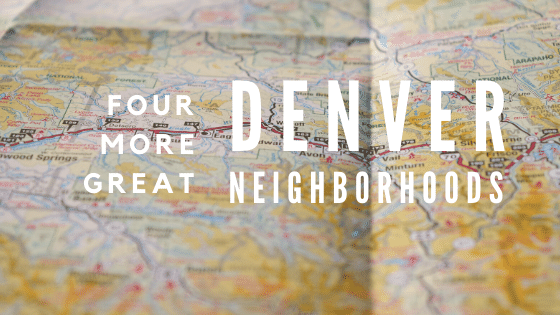 Unfortunately, the secret is out that Denver is one of the most desirable places to live in the country. People seem to be moving here in droves, and with the sunshine and plethora of outdoor activities, it’s easy to see why. This means that the competition to find great housing has never been fiercer in the Mile High City. Fortunately, Denver boasts a wide variety of neighborhoods that includes some hidden gems. These represent a cross-section of housing in the city. One of the best aspects of Denver housing is a large number of neighborhoods that retain relaxed, almost suburban vibe are nestled in the heart of town. The four areas below represent examples of this. This is meant to serve as an introduction to the neighborhoods along with some expert tips on where to eat in them.

Hampden South has been one of Denver’s best-kept neighborhood secrets but word is starting to get out. To start with it offers the joys and tranquility of living in a more suburban environment while still being very much in the city and county of Denver.

Situated directly next to the Belleview Station light rail stop ensures that residents can get anywhere in the city quickly. It’s also a short drive to the Tech Center for those working in that area. With a plethora of grocery stores, entertainment options and outdoor spaces it’s an amazing neighborhood.

There are a ton of options in this neighborhood, but you might want to start at Tiffany Plaza. You could stop and grab a snack at the gigantic and absolutely gorgeous Whole Foods, where they smoke their meat in-house. Or if you’re looking for a full meal, next door is the Fresh Fish Co. which flies in fresh fish daily and serving some of the best seafood in the Mile High City.

Nestled in the heart of the city is this absolute gem of a neighborhood that makes up for lack of size with stunning beauty and charm. The park the neighborhood is named after is a great example of the amazing parks Denver offers in almost every area. Although most of them are not this beautiful. Filled with bike paths and green spaces, it’s less crowded than Wash Park, and the lack of water means a delightful lack of geese. The highlight might be the Denver Botanic Gardens, which is extremely affordable for a yearly membership and one of the most relaxing places in the city. If you do get a membership, for a small fee you can get a key to a hidden entrance on the west side of the gardens. Just be careful around Halloween because the park was built on a graveyard and is said to be haunted.

Colfax is beginning to be a great culinary destination in the city. Head over to Fat Sully’s which is a pizza spot inside of the Atomic Cowboy bar for a slice and a beer. If you’ve had a few too many you can stop by Pete’s Kitchen, which is a late haunt that has been sobering up generations of inebriated Denver residents after the bars close. For something a little higher-end, head over to Q House, which has the best Chinese food in the city.

Known as the Harlem of the West, this enclave has a rich history that is tied to the fabric of what makes Denver one of the best cities in the country. The proximity to Downtown makes it one of the most desirable areas of Denver, and housing prices have steadily been increasing accordingly. It technically encompasses the micro-neighborhoods of Curtis Park, Ballpark, and RiNO, although you could argue those are separate entities unto themselves. Either way this spot has it all from, hip coffee shops, to culinary hot spots, to music venues.

There are dozens of great options to choose from here but our favorite is without a doubt Rosenberg’s Bagels & Delicatessen. Bagels in Denver unfortunately for years left something to be desired. However, this scrumptious monument to the glory that lox on a salt bagel represents, proves that New York isn’t the only place with a great bagel.

University Hills is one of Denver’s most beautiful neighborhoods filled with families and ranch style homes. This quiet residential area will not have a loud nightlife, but you will find great proximity to a number of retail and dining options. The area boasts several movie theaters and shopping districts, along with the underrated Eisenhower park. University Hills also borders the gorgeously tree-lined High Line Canal. It is a very short drive to I-25, which provides access to the whole city. A short drive away the prestigious University of Denver offers an assortment of cultural diversions from a symphony to film showings to renowned public speakers.

While the neighborhood doesn’t have quite as many restaurants as other areas of the city, it does have a solid number of classics that local residents swear by. There are quite a few delicious Middle-Eastern options to choose from. Amira Bakery is known for baking Lebanese delicacies and pretty much anything on their menu is great. Our pick is the fresh-made pita covered in the Middle Eastern spice zaatar.  Marrakech Grill has been dishing out food to DU students and neighborhood residents for years. If you’re looking for something a little more classic, you can’t go wrong with Poppies. They’re known for excellent cocktails and prime rib; make sure to MOn-Sin 3-6 pm for an amazing happy hour.